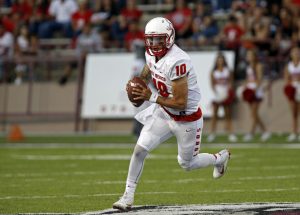 I’ve had the honor to help with Special Olympics every year in college. I love helping other people and I always learn a lot from the awesome competitors in Special Olympics. It is amazing to see how much the athletes love their respective sport and the passion they have for competing!

The hardest college class I’ve had to take was a Kinesiology class. I had to memorize basically all of the human body parts and give their specific functions.

My dad is my role model because his first priority is helping other people. He is a high school football and baseball coach and a teacher and he cares for his players and students more than anyone I know. He’s very passionate about what he does.

I also played baseball and basketball growing up.

When I’m breaking down film, the two main things I look for are the defensive schemes we are going to see and also personnel tendencies. You can get a lot of information or the defense from watching a players tendencies.

The toughest player I have ever faced was Trent Murphy at Stanford.

One player in the NFL that I would compare myself to is Derek Carr. Physically we are of similar size, but I think my game most resembles his because he is an accurate passer, understands the game extremely well, is a great leader and can keep plays alive when he needs to.

I pray before every game and I like to play catch and run routes with some of the equipment managers. It gives me a chance to get to know them more and get the blood flowing a little more before a game.

My biggest strength is that I can make any throw on the field. I can throw it hard and I can also put touch on the ball, and I feel I can be accurate on any throw asked of me.

My biggest weakness is being consistent on my footwork for every drop I take.

I would say that I’m a guy that will always make everyone around me better and that I can make every throw on the field.

My favorite player growing up was John Elway and my favorite team was the Broncos.

The three people I would choose to have dinner with would be Jesus, Conor McGregor and Will Ferrell.

The first big item I would buy would be a black on black Dodge Ram 2500.