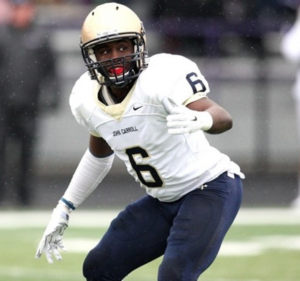 Michael Hollins of John Carroll is a very solid player who

I can’t single one thing out, but I give back as often as I can. Some of the opportunities I’ve had are speaking to the football team at my Alma mater (Maple Heights), speaking for youth programs, volunteering at jails, and speaking to my former football coach’s teams.

The hardest class I’ve taken is either Anatomy or Kinesiology

I think asking who my role model is, is a broad question. I may admire a certain person in a specific aspect of their life while disagreeing with them in others. It really depends on what the situation is.

I wrestled growing up!

My technique! I LOVE being out there and simply out playing the guy in front of me.

I can’t give away all my secrets. To name a few are splits, tendencies out of certain formations, and body language. (I gave away too much)

Darrelle Revis! The guy is a technician! An athlete at CB you never know what you are going to get. One game he may make a big play or he may not. While a technician is consistent in his performance.

The passing of my father! Some tragedies in life you have to rely on faith. 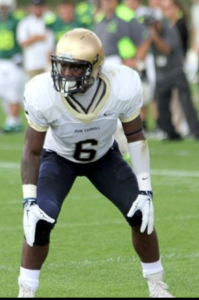 Let’s just say I build up to kick off. Starting with gospel music and ending with extreme violent music hahaha. I can’t give away my routine.

I’m a leader! I try to make the players around me better

Ray Lewis and the Baltimore Ravens. Ray Lewis Passion was all over his craft and that defense was phenomenal on all three levels.

Nothing! Just because you make it to the NFL doesn’t mean you are going to stay. First thing first is investing!