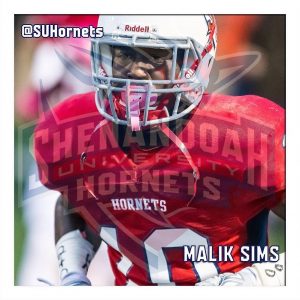 Malik Sims of Shenandoah is a big time player. He could be the next NFL standout like Rico Wallace from SU.

My name is Malik Sims

The coolest this I have done off the field is coach three and four year old flag football.

I am from Suitland, Maryland

My role model is my mom; because of how hard she works to provide for our family she will give her last to make sure our family is good. It’s time she didn’t eat just so we could

I played baseball in 8th grade

I played Quarterback, Running Back, Outside Linebacker and Wide Receiver.

What separates me from others at my position is physicality. I love the contact of the game. I like to blow up pulling guards coming to make run lanes. Also my will to win I know how to help people around me get better so the team can win.

When breaking down film I look for Wide Out tendencies. If he shows when he is breaking into a route by standing up or if when it’s a running play is he jogging off the ball. I also watch the quarterbacks witch side of the field does he like to favor when throwing. Which line is the weak link. Is the running back physical or shifty

The toughest player I have ever faced was a wide receiver that went to Guilford College named Adam Smith. He was fast just like me, had some physicality but could flat out play football

If I could compare myself to someone in the NFL it would be Tyrann Mathieu. The reason why because he is under-sized by most people but his heart is unmatched, his physicality is one of a kind, he is always around the football. I see myself when I watch him play.

The biggest obstacle I ever had to overcome was coming into college and not being the star player. It was a humbling experience for me. I overcame it by checking my ego realizing that in order to be good you have to learn from people that have been there. So I shut my mouth and listened, worked twice as hard.

My Pre-game rituals are talk to my dad before the game, pray then listen to some meek mill usually gets me in my zone

My biggest strength is my work ethnic. I work so hard because I’m so scared to be a failure.

My biggest weakness is I tend to overthink certain situations. Just need to go with my original thought 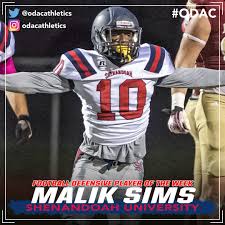 I would say that I am a player who knows how to win. So with bringing me to your organization I want to do everything possible to win championships. I am going to make everyone around me better by going max effort everyday

My favorite football team is the Washington Redskins. My favorite player is Tyrann Mathieu.

If I could have dinner with three people I would choose. Malcolm X, My Great Grandfather and Lebron James