Josh Norman fires back at Dez Bryant; “Not a battle when the other person doesn’t show up” 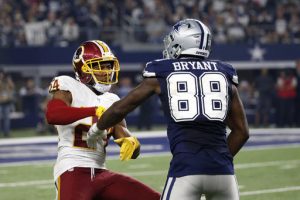 Norman and Bryant were fighting with one another, and now Norman has a response to Dez Bryant’s comments

Josh Norman has finally responded to the antics and comments of Dez Bryant after the Cowboys/Redskins turkey leg showdown. Norman says he does not believe it is a battle if one person doesn’t show up.

“It just baffles me that we’re going back and forth,” Norman told NFL.com by phone after a day of reflection, watching countless media outlets focus on Dez Bryant’s comments after their Thanksgiving showdown. “I don’t know if there really is anything to say. What am I going to go back and forth for? It’s not a battle. It’s not a competition when the other person don’t show up. What am I competing against? I compete against myself every week.”

In 2015, Norman while with the Panthers told the media the Cowboys had to get their 70 million dollars back for Dez.  That was Dez Bryant’s response back to him after their week 12 match-up on Thanksgiving. Norman however was not impressed:

“If you have a big impact, go off,” Norman said. “But you didn’t.” Norman found Bryant was out of his game, trash-talking out of frustration and moving into the slot to escape. In the Redskins’ defense, Norman doesn’t follow Bryant there. He admits the Cowboys are good — who wouldn’t?

“But it’s not like he carries them,” Norman said. “They carry themselves. That stuff he does, it’s just extra antics.”