Josh Huff was also arrested for DUI and other traffic offenses 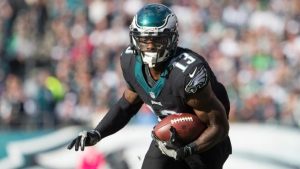 Josh Huff could be in some hot water with the NFL

Yesterday, reports came out of Philly that Josh Huff was arrested for possession of a gun, possession of Mary Jane and that he was speeding. What wasn’t reported is that he was under the influence as well.  According to NBC10, Huff has some explaining to do:

Per the Delaware River Port Authority, Huff was stopped at approximately 11 a.m. heading to New Jersey for speeding. Huff in his possession had a gun, loaded magazine (which wasn’t in the gun) and less than 50 grams of marijuana. The lead charge is for unlawful possession of a weapon and prohibited weapons/devices for hollow point bullets. He’s also charged for having the marijuana and faces traffic offenses for DUI, speeding and, because the windows of his vehicle are tinted, obstructed view.

A source has told NBC10 Huff had a permit to carry the weapon in Texas only. He also was driving 63 mph in a 45 mph zone.

The Eagles are aware of the situation and gave this statement:

“We are aware of the incident today involving Josh Huff. At this point, we are gathering more information,” the Eagles said in a statement earlier Tuesday afternoon.