Went back home and helped Coach the Pop Warner team I started with and just worked and had fun with the kids.

Algebra was the hardest

My dad is my role model because he is the man I aspire to be like. He preaches honesty, respect, and integrity and that’s how he lives his life as a hardworking man and he is very selfless. He just has so many traits I aspire to have and practice throughout my life

I believe my speed, blocking, patience, durability, versatility as a pass catcher, ability to make people miss in tight spaces and ability to break tackles.

I look for what techniques defensive tackles play in certain looks, how defenses play certain offensive formations, tendencies of defensive players when going to make a tackle, Blitz keys, whether safeties roll over the top or what techniques D tackles play when a Blitz is coming. When I watch myself I look at my decisiveness or what I could’ve done differently on a run or picking up a blitzer or blocking on the perimeter. I also look for how defenders play me as a runner, blocker and receiver. 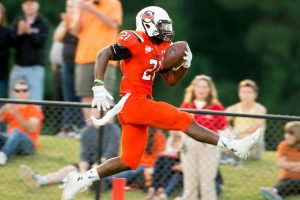 The toughest player I’ve ever faced since I started playing was in High School, his last name was St. Pierre I believe and he played D tackle. No other player single-handedly gave me as much trouble as he did.

Arian Foster or Matt Forte because of their ability to be so versatile and their ability to run in or outside the tackles and they’re very good zone scheme runners which I believe I am as well.

The biggest obstacle I’ve ever faced is finding a new home after a coaching change at Western Michigan University caused me to have to transfer with no film except my high-school film because I was a redshirt freshman. I overcame this obstacle by just continuing to believe in myself and my purpose and to keep my faith in God, knowing he was taking care of everything and knowing that I was going to play football again.

I just call my parents, pray and listen to music.

My biggest strength would be my versatility as a pass catcher out of the backfield.

I can over think which causes me to hesitate at times.

I would say that I am a special person and player and I will give everything I have to prove it and give the organization the best I can give and my all and be a player they would be proud of.

Michael Vick was my favorite player but now it’s Cam Newton and my favorite team is the Panthers because of that. Barry Sanders is my favorite Running Back ever.

Whatever item my parents wanted