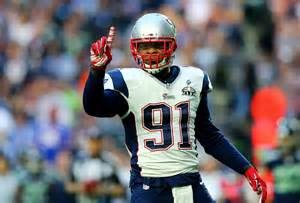 Jamie Collins is now a Cleveland Brown, but after he was traded it, the people in New England began to turn on him. You would have thought that Jamie Collins did something wrong, but that was not the case.  It was a case of the Patriots making a move to ultimately save money.  According to Pro Football Talk’s Mike Florio, Collins never once asked the Patriots for Von Miller type money like it was reported by Adam Schefter of ESPN. A matter of fact, Collins says he is not Von Miller.

Collins is set to become a free agent after this season comes to an end and Miller signed a six-year, $114.5 million contract with the Broncos earlier this year. Ben Volin of the Boston Globe also reported that Collins turned down an offer from New England that would pay him $11 million a year, something that Collins denied along with the “Miller money” report on Wednesday.

Either way, Jamie Collins will get paid next season.  He will be a free agent at the end of the year and I think the Browns will pony up some big time cash to keep him.