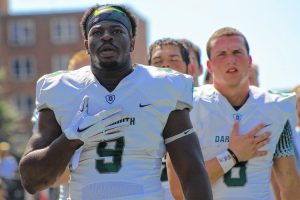 Folarin Orimolade is a monster that NFL teams love

Giving food and jackets to the homeless in Washington DC for the Christmas holidays with my Church.

My Parents, because they are selfless and hardworking and I want to be like that. They also sacrificed everything for me and my younger brother.

I mostly played basketball growing up, a lot more than football. I did do a year of wrestling and T & F as well.

I have played every linebacker position this year alone (3-4 and 4-3 ILB, along with 3-4,4-3 OLB) in high school I played tight end as well, and defensive end.

I think I am the most versatile linebacker in the country (FBS or FCS). I don’t think there are too many people that can rush the passer and still play well covering guys and scraping across the middle.

Tendencies with certain formations. Certain alignments by lineman and rb for certain plays. How offensive tackles set so I know they will react to my moves/ what moves will work.

Cole Toner is the best lineman I’ve ever played, he was an extremely smart player.

Elvis Dumervil, because I can bend like him and I use his swipe move all the time. And when we need to we can use power to drive o lineman back.

The biggest obstacle is graduating from an Ivy League institution 2 terms early, while giving all I had to football. I just had to sacrifice certain times that I wanted to do other things. I had to be a better time manager and be more decisive in everything I did.

Sometimes I try to do too much, and make plays that aren’t mine and then I get beat.

I am able and willing to play any position/ special teams necessary to get on a roster and get on the field. Nobody will prepare for a game more than I will. I am the most versatile linebacker FBS or FCS so I can be lined up anywhere. I also am very smart so I will understand schemes very well. 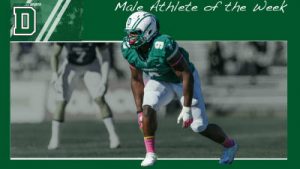 Car for my mom. White benz.