Fantasy Football Week 11; These wide outs are guys that you have to start 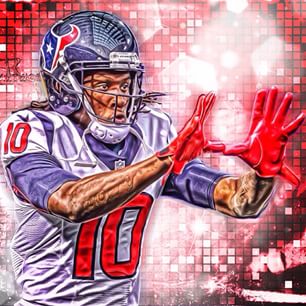 -Hopkins is on track to have less than 900 receiving yards on the season, which is crazy compared to the last two seasons where he had over 1,200. Inconsistent QB play did not seem to faze him in past years, but Brock Osweiler just hasn’t had the chemistry with him this season. This week could be different for Hopkins because he will face Oakland, who has allowed 17 passing TDs this season. Osweiler targeted Hopkins 13 times last week, which is promising for fantasy owners who have been disappointed with his performance so far.

Kelvin Benjamin vs. NO.

-This pick is based solely on a great match-up. Last time Benjamin played New Orleans he had 86 receiving yards. Expecting similar numbers or better is promising as the Saints have yet to improve on their horrendous defense.

-Thomas had just 40 receiving yards and 2 fumbles last week against Denver, but the Broncos have probably the best overall defense in football. Carolina can’t say the same about their defense that has struggled all season. Last time this match-up occurred, Thomas had a big day posting 78 receiving yards and a TD. He has clearly earned the trust of Brees.

-Hilton has been great for most of the season and when he faces Tennessee on Sunday, he has a good chance of keeping his owners happy. His numbers against Tennessee are impressive throughout his career and the bye week should benefit the whole offense.

-Three touchdowns in a game as a receiver not only demands respect for being talented, but it shows you that Russell Wilson knows where to throw the ball. Although Philadelphia’s pass defense ranks near the top of the league, they allow offenses to feed the ball to number one receivers. Just ask Julio Jones, Antonio Brown, Dez Bryant, and Odell. This week shouldn’t be any different.