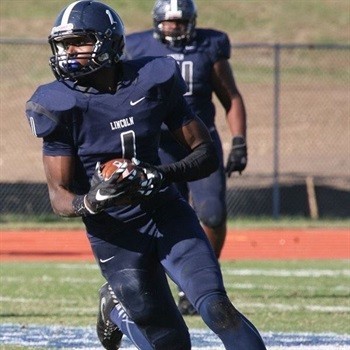 Darius Hicks from Lincoln University can cause secondaries problems

I worked youth football camps, I love coaching what I know so I actually have fun teaching HS kids and younger kids what I was taught and what helped me better my game.

My Mom. Shes been through a lot and I been watching struggle my whole life. I’m just ready to take care of her. Release all her problems and struggles.

I’ve only played football my whole life but my SR year in HS I started playing soccer. Loved the game ever since.

I played a little CB here in college but in youth football I always played on the OL and DL also played some TE.

I began studying and learning how to play DB because I want to know the techniques they use to guard a WR. By doing that I know exactly what will beat a DB in certain techniques so feel that gives me a slight advantage. I also cannot get enough football. After practice I have to stay and run routes and catch passes. It’s mandatory for me.

I’m looking at the coverage, the DBs techniques, how he moves his feet and looking for his weakness when he is pressing. I’m also watching the LBs to see how often they blitz and when they drop back to cover.

My best friend Deandre Elliott (Seattle Seahawks CB). Had a real tough time with him everyday in practice while in HS. Next is another former teammate of mine Robert Daniels. I honestly haven’t faced any tougher DB’s than them in an actual game.

AJ Green. He has speed and can make people miss while being a tall, lanky receiver. He also makes some of the weirdest catches. Hes always been my favorite.

I didn’t have any offers out of high school due to our WingT heavy run offense and it forced me to make the decision to walk on at a school. While I wasn’t play football for that 2 year span I was miserable and depressed but I never really told people how I felt. I kept pushing until I made the team at Navarro and now I’m here.

I don’t have a unique ritual. I just make sure i have some music in my ears and go run around the field and catch passes from my QB. Mostly with one hand.

The Jumpball. I’ve always been known for catching jumpballs. People will say “Just throw the ball up to hicks” I take pride in that.

Catching the ball when I know I’m about to come into contact. I tend to attempt a body catch rather than my hands to make sure I secure the ball and sometimes it results in a drop.

I’m hardworking, hungry and have a true love and passion for the game. I Will stay after practice every day making sure i get routes in and catch passes. I’m willing and more than capable of playing whatever position I’m needed at. Doesn’t matter if its special teams, DB or WR I will do everything in my power to go in and make a play for the team.

My Favorite player has always been Desean Jackson. We have almost nothing in common at the position I just love his game. I’m from Dallas. Of course my favorite squad is Americas Team. Cowboys