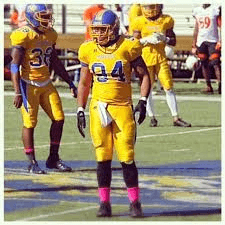 DaJon Montague is a solid edge rusher for Mars HIll. He knows how to get after the QB

Visiting the elderly home with my teammates. As well as take care of local elders in Mars Hill with there In-home caring.

My father, He is one who has faced more adversity than I alone could have ever imagined. He never folded under pressure and has taught me by actions that hard work always fuels success.

I played basketball, baseball, and soccer

My size, at 6’3 252 I am considered undersized for a DE, but I play big and fast which confuses many offensive lineman hence my success on the defensive line. It also gives me the advantage of playing linebacker being able to drop into coverage as well as play the run, makes for a great combination against any offense.

When I break down film I am always watching my opponents favorite offensive sets. What do they run most? Who is there go to target? Most importantly I like to watch my offensive matchup which would be the offensive tackles. How do they pass set? Is he heavy up top? Does he lunge? How is his run blocking? Is he aggressive? How susceptible is he to specific pass rush moves. Just a few to name.

Toughest player I have ever had to face was definitely an offensive tackle that played for ASA Jr. College when I played for Dean Jr. College he was committed to Alabama. He had great feet and hands which made for a great game between me and him.

Biggest obstacle I had to overcome was probably having to take a year off from school, and football to help my family pay bills. I never thought I would be in that situation but life is full of curveballs and the best way to go about it is to roll with the punches, and always push forward. That whole year was a humbling experience and it made me a stronger man, and athlete. It taught me the value of family and most importantly the power of faith. With faith you can not be stopped with any endeavor.

I like to listen to music. Other than that nothing over the top. However the song Big Amount by Future and Drake I must listen to before The headphones come off. 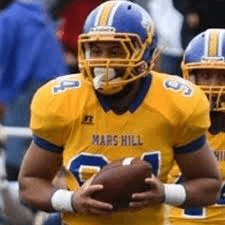 My biggest strength outside of my size, is my pass rush. I am certainly not only limited to that specific area. Im very proficient in the run game which a lot of good pass rushers lack, so the two together makes me a force that must be acknowledged.

Biggest weakness would have to be, my size. Even I would not consider that an weakness in my eyes. I like having that ability to run past Tackles and be able to get underneath them with my leverage at 6’3 Im not 6’4-6’6, so I can bend a lot better off the edge.

I would say you would be getting not only a football player, but a man of God. My faith has driven me to reach levels on the field that I wouldn’t reach without it. Im nothing shy of adversity and hard work. You will be getting a employee that will come in day in day out, and give you everything in the tank and then some. A player who is very coachable and who will always put the team first. Most importantly you will get a champion with a winning attitude and winning presence at all times.

My favorite player growing up was Ray Lewis and Brian Dawkins. Two of the most emotional players I believe that graced the game of football. Two players that both deserve the number one spot because there work ethic and drive propelled them past any of there NFL counterparts and it set them apart.

My grandmother one more time. Barack Obama, and of course the great Ray Lewis.

First big thing probably wont be materialistic I will pay my tithes and offering at church, and then my father will get his four door pick up truck.