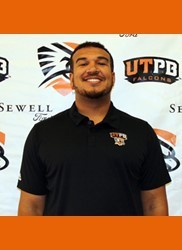 Corin Brooks of UTPB is a big boy with athletic ability

University of Texas of the Permian Basin

I have done numerous kids camps and tried to help pass some of the knowledge I have learned to the youth.

My father. He is a real man who gives me guidance even if I want to do things my way. He always has my back and I view him as the best man on earth.

Yes. Basketball, baseball, soccer, track, and did some gymnastics when I was young.

Defensive end, defensive tackle, offensive guard, tight end. I was initially a Defensive Tackle during my first year of college.

My athleticism and technique. I try to stay composed and use my fast feet and proper hand placement because that’s the only way to win at left tackle.

I look for tendencies. You can tell often when teams are going to pass, run, blitz and twist. I look at the individual defenders moves and how he sets it up. I also look at how a defender torques his frame so I get a better understanding of how I will be able to block him.

La’el Collins. We have a similar build and athleticism. He played tackle in college and guard at the next level and that’s where I see myself. He is athletic and aggressive with great technique and I try to play the same way.

Probably just being patient for my opportunity to play. Sometimes I found it hard to be on the sidelines but I always kept my self-belief and faith that my time would come.

I drink a Pedialite before every game. Also I take a pregame walk of the field.

Athleticism, composure, and technique. I work well with my hands.

Sometimes I am over aggressive which can backfire on you playing offensive line.

I’m a great team guy. I’m a hard worker and you won’t be disappointed with my style of play. I feel like I can play with anybody and I just want the chance to prove myself worthy.

Drew Brees, and my favorite team growing up was the New Orleans Saints.If you could have dinner with three people dead or alive, who would you choose?

I’m not that into buying myself expensive or nice things. I would try to pay off my school loans before anything.