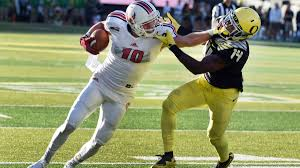 I love working camps in the summer and teaching kids how the game is played. My wife and I have also had the opportunity to speak at some local schools about life outside of athletics.

Econometrics 327. It was a doozy, but ended up being one of my favorite classes, too.

I really loved the way that Walter Payton played the game. He had reverence for the game but understood the platform it gave him and opportunity to influence lives off the field.

I grew up playing soccer, basketball, and baseball along with football.

I have returned punts and kicks, lined up at QB and running back.

I strive to continue developing as a player and to never become stagnant. I focus on the technique of the position, and try to build a utility belt that allows me to create separation in multiple ways. 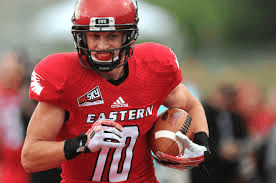 I look at coverage tendencies for down and distance as well as formations. I try to find what techniques corners and safeties prefer when pressing and how to expose them.

Larry Fitzgerald because of the way he separates and the tools that he uses to constantly win. As well as his football IQ.

One of the biggest obstacles was being undersized for a large portion of my life. A lot of people write you off early because they don’t see the potential in you that you see in yourself. It was also one of the biggest blessings because I learned a lot about myself as well as the mindset it took to get me to where I am today.

I pray multiple times on game day and throughout the game. I play this game with a purpose and praying helps keep me focused on that.

My mindset and work ethic which allows me to progress constantly as a receiver. I pride myself on creating separation and making the tough catch.

At times I am thinking too much before a play in making sure we are on the same page as an offensive unit instead of being locked in solely on what my job is.

I bring maturity and a work ethic that I believe is unmatched as well as a mindset that I can not and will not be beat.

Favorite player was Reggie Bush and his time at USC

I’m not sure, haven’t thought that far ahead!