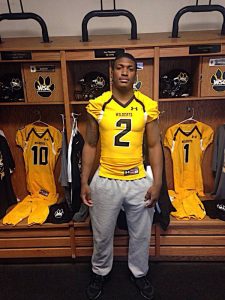 Cameron Montgomery of Wayne State hits like a grown man. He is a playmaker in the secondary

The coolest thing I have done off the field will have to be going to a small elementary school in Arizona by the Mexican border while attending junior college. The kids were excited to see us as if we were NFL players.

I am from West Orlando, Florida

My role model has to be God and my parents (Karen and Micheal) without him I am nothing.

I ran track a lot as a young boy.

In high school I played wide receiver until I transitioned to safety my junior/senior year.

At my position what separates me from others is my ability to play in the box, cover the slot, and play deep third safety.

When breaking down film I always look at what the quarterback and his eyes, and whether he’ll stare down a lot of routes or look me off. Also I check to see the strengths of their wide outs as far as how fast or quick they may be off the ball as well as rout running so I can know what I am dealing with. I also look at the running back to determine what style of back he is. 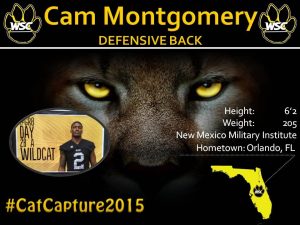 The toughest player I ever faced was Devon Paye, running back at West Texas A&M.

If I could compare me to another player it would be Calvin Pryor. He comes up and makes the solo tackle just like I  capable of and he also makes plays on the ball.

The biggest obstacle in my life would be when I had to attend a military school for junior college football. It was just a tough two years having to deal with military stuff then football stuff as well. But the guys I met there are my lifetime friends that I can hit up whenever.

No pregame rituals just music and getting my mind focused and body loose.

My biggest strength would have to be when I roll down from safety into the action around he box area.

My biggest weakness would have to be dealing with the big guys on the offensive line. I forget sometimes that they are about 100-150 more pounds than me so I have to be a bit more smart when taking on a 300 pound lineman.

As a football player that’s what you are going to get a football player. I feel like football is football and if you know how to play the game then you can be very successful no matter what your 40 time is or vertical jump. If I were given the opportunity for a chance there will never be a day, meeting, or practice that I will take lightly because I know that this the big boy business.

My favorite player growing up had to be Reggie Bush at USC he really was electric, he was very special. My favorite NFL team growing up was the Dolphins as well.

If I could have dinner with three people it would be my best friend Clim, Steveo, and Tiera.

The first big item will a nice house for my mom and dad they deserve anything I earn without them and God this journal would have been dead a long time ago.