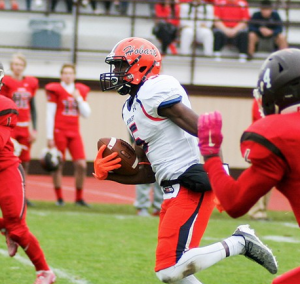 Every year when I return home from school during the summer I work football and basketball camps. I also work with some younger kids outside of those camps because I never had someone older to look up to and teach me how to play football. I just want them to have someone they can look up to and not run the streets and stay out of trouble.

The hardest class I have taken is computer science 124. Very long hours in the lab coding.

I look up to D.Wade because of how he puts his team first. He’s never been the highest paid player during his 12 years with Miami and never complained about it. Hopefully he comes back to Miami, we need him.

I played Safety, corner, Running back, D line, Quarterback, pretty much everything except kicking and punting, but i’m sure I can learn.

My ability to track and win the jump ball. I love jumping for the ball and ripping it from the DB’s hands.

I look for how well the DB turns his hips and if he’s aggressive or not.

I’m from Florida so I played alot of tough guys, but I have to say Travis Rudolph who plays at FSU. He’s a beast and I look up to him.

I would say T.O because people say I look like him. I like how aggressive he was and I’m working to be as big as him.

High school. I went to a high school where I didn’t know anyone at first and the school was know as one of the top schools in the state of Florida. I struggled with grades but my teachers stayed with me allowed me to stay after hours to make sure that I fully understand the lesson that we covered that week. Blessed to have teachers like Mr.Anderson who took time out of their evening to work with me when he could have just went home to be with his family.

I love to listen to Chance The Rapper and chew a lot of gum during the game. Gum may be the death of me.

My height. Not too many DB’s at this level can Jump with a 6’3 receiver

I never really had a real Wide out coach until this year, so i’m just learning how to run routes and how to stack and stem defenders. 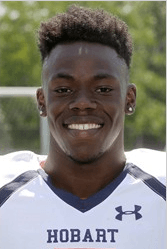 That i’m a hard worker and I won’t let this is a once in a life time opportunity slip away, especially coming from the D3 level.

I’m a huge Dolphins fan and I love Cam Wake and Ronnie Brown when he played.

I would chose D.Wade, Cam Wake, and Brandon Marshall

I want to buy my parents a house. They went above and beyond to make sure I have food to eat, clothes on my bad, and a roof over my head.