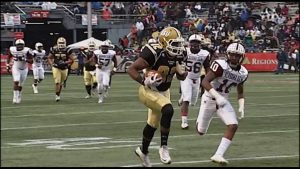 Brandon Barnes of Alabama State has NFL teams drooling over him

My dad because he taught me the value of hard work. Julio Jones because he’s my favorite player since High school. Antonio Brown because he was a walk-on just like myself in college. Delanie Walker because he is my favorite tight end.

Basketball, Baseball, and track and field

None other than special teams.

What separates me from others is my versatility. I can play receiver, line up with my hands in the dirt, I can also play h-back as well and I have much experience doing all three.

Defensive tendencies of other teams, how they try to disguise coverages, how defenses adjust to motions. Also, I pay close attention to who will be guarding the tight end.

Bud Dupree my freshman year in college when we played Kentucky Wildcats. And Javancy Jones from Jackson State

Greg Olsen because we do a lot of similar things and he is also very versatile.

The fact that I walked on and I didn’t get on full scholarship until my Junior Season right after my mom passed away. To be honest God is the only way I could have possibly overcame those obstacles.

After our team runs out I always run to the back of the end zone to say a prayer before every game. What is your biggest strength?

The fact that I can do a lot of things such as catch the ball; I can block decent but I can be a lot better and I play just about every special teams except for kickoff.

Blocking because I know that is something that I need to improve on, but I have been working on that and I have film to prove that I have gotten better as the season went along.

I don’t know; I have never thought about it. Maybe give back to my high school because they need it.