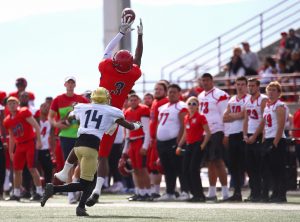 Signed autographs for children after our games.

My mom is my role model, she is the hardest worker I’ve ever been around in my life!

What separates me is my ability to make difficult and contested catches in traffic.

I look for different tendencies such as how the Defensive backs stand during different coverages, how they backpedal and come out of there breaks

The toughest player I’ve faced is hard to say. I’ve went up against good players but if I had to choose it would be David Gurthie who I played against in JUCO and he want to New Mexico University.

My biggest obstacle in life was committing myself in the classroom. I was not a good student in high school which resulted in me having to go to junior college to play football first.

Pre game rituals just involves me listening to music, I have to listen to music

My biggest strength is my hands. I say I have really good hands

My biggest weakness is my quickness, I’m not the quickest but I’m not slow.

I would say I will be the hardest worker on your team, I will do whatever you say to the best of my ability and then some!

My favorite player is Randy Moss growing up/ and Pittsburgh Steelers 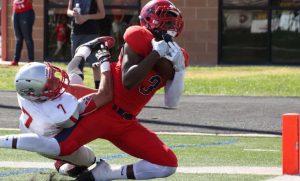 I would have dinner with Randy Moss, Martin Luther King, and Deion Sanders

The first big item I buy will be a house for my mom and a car for myself haha.