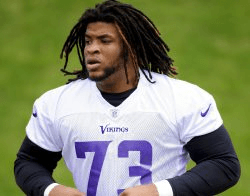 Pro Football Talk is reporting that he faces three misdemeanor charges, including fourth-degree drunken driving, after he was spotted making an illegal U-turn across a median and driving the wrong way down a highway ramp.

The Vikings are aware of the situation and released this statement:

“We are aware of the situation and will have further comment at the appropriate time,”