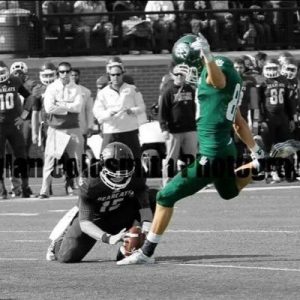 Simon Mathiesen is a big boy with a big boy leg. He can make all the NFL kicks

I spend a lot of time with my fans outside of the field, so going to a kid’s birthday party is probably one of the best things I’ve done off the field. It is important to me to be a big part of the local community and college, help out, meet with and interact with the local fans, and thereby be part of a bigger thing – especially since I am so far away from home. This gives me a lot of positive energy and I know the importance of being a good role model.

Probably intermediate financial management. It was a difficult but very interesting class – I prefer to be challenged in the classroom as it only enhances my academic progress and overall academic level. Success in the classroom has great importance to me and I take pride in the academic awards I have been rewarded during my time at Northwest.

I was born in New York City, but moved to Copenhagen, Denmark when I was 4 years old. I then moved back to the States when I was 20 years old to play college football. I have dual citizenship (American and Danish)

My biggest role models are my parents. My mom is the nicest and most careful person I’ve ever met and my dad is the coolest person I know. They have taught me everything I know when it comes to being a great and competitive person.

I played soccer until I was 18 years old, but eventually ended up choosing football over soccer. I got a lot of my kicking ability from playing soccer.

I played wide receiver for 5 years. Northwest actually brought me in as a WR, but I then switched to kicker halfway through my first season.

I think my mental toughness is what makes me a good kicker. I’m good at focusing on myself and the next kick, and I feel like I’m good at blocking out distractions. I don’t really let pressure get to me. I also think I play better in big games – this can be seen in my stats as well, as my FG % in playoff games during my college career is 93.3 % (14/15) so far.

At my position, I only look at my own mechanics. I’m much disciplined with my film study of myself and I analyze all my kicks after every practice and note down what I did right/wrong on my individual kicks. My ability to analyze myself and my kicking mechanics is constantly helping me improve my overall kicking.

I would compare myself to Justin Tucker. Our kicking motions are pretty similar and he seems to progress as every season go on, just like myself. My kicking range is about the same as his as I got leg to about 57-58 yards out (even though I am yet to attempt a FG that long in a game). When it comes to kickoffs, I am capable of kicking the ball out of the EZ as well as kicking high kicks to the corner with a 4.0+ hang time just like him.

I go over my kicking progressions before every game and in the beginning of every offense drive.

I feel that an obstacle I have to overcome is the limited exposure D2 players usually get compared to big schools. But that does not discourage me by any means, it only makes me want to work harder and prove myself when the opportunity to showcase myself is in front of me.

My mental toughness and my ability to block out pressure. I think these are some of the most important traits for a kicker to have as you need to be able to focus on one kick at a time and not let the pressure of big kicks in big games get to you. It does not matter to me if I play at a filled stadium in a playoff game, or if I’m kicking at practice – the pressure does not change for me.

Earlier in my career, I would sometimes lose a bit of focus on short FG’s and XP’s thinking it would be impossible for me to miss. I have gotten rid of this weakness during my last two years in college and I approach every kick the same now.

I would say that I am a player that commits myself 100 % to perform at my very best at every practice and game. I constantly strive to improve myself and I will never settle for where I’m at. I am a mentally tough player who is able to perform under all circumstances and adversity only makes me a better player. I’m an energy giver in the sense that I bring a lot of positivity to a team as I strongly value a great bond with my teammates and coaches.

My favorite team is the Dallas Cowboys and they have been my favorite team ever since I started to watch football back when I was around 14 years old. I was a fan of Terrell Owens and Randy Moss when I grew up as they were the best WR’s at their time. Now, I look up to players like Dan Bailey and Stephen Gostkowski.

I would chose to dine with David Beckham, Albert Einstein and Steve Jobs.

I would buy myself a nice watch, take my friends and family out for a nice dinner and invest the remaining in an index fund.