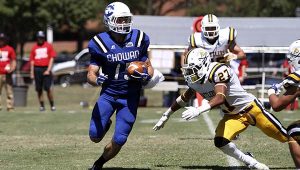 Ryan Nolan is a machine for Chowan. The former QB can do it all.

Being able to help out in the local community we built some playgrounds for the one of the local schools, and also went into the school to sign yearbooks and hangout with all of the kids.

My parents because of how hard they’ve worked to support both my brother and me.

I’ve played receiver, running back, quarterback, punt/kick returner, and punter all in college.

I run a lot of read/option routes in our offense  so being able to read coverages pre snap and while running my routes to make the right read and get open, catching in traffic, and being able to block in the run game.

Coverages defenses will run to certain formations/ down and distances, defensive tendencies, also watch the players I’ll be most likely matching up with to find their strengths/weaknesses.

Probably one of my teammates here Dave Fulton who went on to play DB for the Packers. 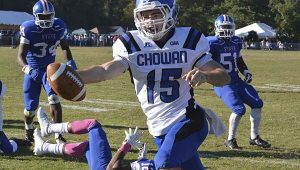 Julian Edelman because of his style of play, and how he can play multiple positions.

Not really usually just stretch and listen to music

Being able to read the defense and find the windows to be open.

Pay off my student loans