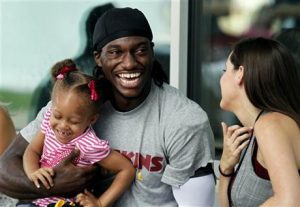 Rebecca Liddicoat wants RG3 to pay for her Legal Fees

Robert Griffin III has filed a divorce from his wife Rebecca Liddicoat, and is dating another female already.  The problem is his wife is saying she was totally blindsided by the divorce. Liddicoat is now asking a judge to order RG3 to pay for her legal fees according to a report from TMZ Sports.

Griffin was the one who decided to file, and Liddicoat says she has hired attorneys in response to make sure she gets a fair share of the marital assets and so the custody arrangement for the couple’s 1-year-old daughter is taken care of properly.

Liddicoat claims she was completely blindsided by the divorce, and real estate records indicated she and RG3 bought a house together just six months ago. However, Griffin says the two were separated and had been having problems for a long time.

This is an interesting concept, considering that Liddicoat will probably make bank on the divorce.