POSSIBLE TRADE SCENARIOS BEFORE THE DEADLINE 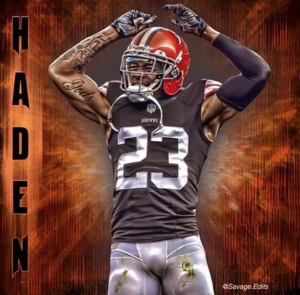 Joe Haden to the Carolina Panthers makes a lot of sense, what do you think?

POSSIBLE TRADE SCENARIOS BEFORE THE DEADLINE

The NFL trade deadline is just one day away and there are plenty of rumors buzzing around the league that include several big-name players. Here is a list of a few trade scenarios that could take place before 4pm ET tomorrow.

Torrey Smith to the Buccaneers:

With Vincent Jackson likely out for the year with an ACL injury, Tampa Bay might be in the market for a wide receiver and Torrey Smith could be a viable option to replace him. Smith has fallen victim to Chip Kelly’s system that relies heavily on getting the ball out quick on short routes, which does not utilize the wide receivers skill-set. Compensation for Smith is prospectively a second or third round draft pick.

Torrey Smith to the Eagles:

Head Coach Doug Pederson dismissed any rumors last week pertaining to the Eagles trading for a wide receiver, but reporter Michael Florio recently reported that Philly might still be in the market after the disappointing outing from the position against Dallas on Sunday Night Football. Philadelphia’s receivers lead the league in drop percentage and their performance is beginning to take a toll on rookie quarterback Carson Wentz. There will be plenty of teams targeting Smith at the deadline so Philadelphia may have to overpay for the 27 year old speedster.

Sheldon Richardson to the Cowboys:

Dallas has played great this year and their defensive unit has been a surprising success thus far. The Cowboys are in the driver seat to win the NFC East, but their pass rush has been underwhelming this season. Adding Richardson would give them a weapon that would demand double teams, freeing up their other young defensive linemen. It would probably take a first round pick or a package of several high-end draft picks to land Richardson.

Joe Thomas to the Cardinals:

Arizona was forced to put LT Jared Veldheer on IR after suffering a triceps injury against Carolina. The team could look to fill the void by making a trade for Joe Thomas, who at the age of 31, probably has 2-3 good years left in him. Left tackle is such an important position and I can’t see the Cardinals ignoring the new glaring whole on their roster. A second or third round pick could be enough to pry Thomas away from Cleveland.

Joe Haden to the Panthers:

The Panthers have really felt the loss of Josh Norman this season, allowing 16 passing touchdowns to opposing offenses. Joe Haden has piled up a list of injuries since beginning his NFL career, but when he is healthy he is one of the most effective corners in the league. The Panthers are desperate for help on defense and the Browns probably wouldn’t mind dumping his hefty cap number ($10.1M this season) for a high draft pick to use in their continuous rebuilding process.

Josh Gordon to the Cardinals:

This move is more of a gamble, but it could be a low-risk/high-reward move for the Cardinals. Josh Gordon has been a superstar when he has played, but he has had a lot of trouble staying on the field due to multiple failed drug tests. He is one suspension away from never playing again, but Arizona would be a perfect destination for him. Gordon would have the opportunity to work with future fall-of-famer Larry Fitzgerald and he could also use Tyrann Mathieu as a supportive resource for his off-the-field struggles. The baggage that comes along with Gordon will lower his trade value to a sixth or seventh round pick if a trade occurs.

Players unlikely to be traded