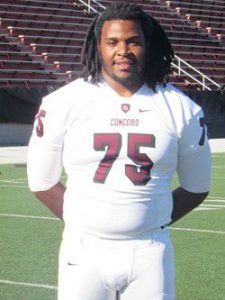 Concord left tackle Paul Smith is a big boy. He is a wall

The coolest thing that I have had the chance to do off the field is to work this past summer as an athletics counselor at a kids camp in Washington DC. It was an extremely fulfilling experience.

The hardest college class that I have ever taken has to be Math 103 at my college. It was a rigorous course that covered a lot of course material in a short amount of time.

My Uncle Bob, he has always been a father figure to me and took me in during a tough time in my life. He always worked hard to provide not only his own children but also me and made me feel like one of his own.

When I initially came to college I was recruited to play defensive line for my college. In 2012 (Redshirt) and 2013 I played Defensive End and Defensive Tackle before being moved over to Offensive Line in the Spring of 2014.

What separates myself from others on the field is my pass set punch. My punch is strong enough to stop defenders and alter their pass rush.

When I am breaking down film I look at the Defensive lineman’s stance and alignment for pre-play ques into what they might be doing. I also watch their pad level and use of hands against the o lineman they are going against. Final thing I look at is their pursuit to the football. That can tell you a lot about a player.

Shaneil Jenkins from Sheperd University, faced him twice and he was a load to block. Very strong at the point of attack and has a great motor.

If I had to compare my play to a player in the NFL it would be Tyron Smith. Right now he’s playing great football and apart of a dominant offensive line. I compare our games because I aspire to be like him while locking down the left side of the line.

Yes I always go back to my dorm after team breakfast and play a game of NCAA Football 14 and listen to my game day playlist to relax my mind. (Home games)

Some of the obstacles that small school players have to overcome are exposure and name recognition. At the D2 level, games aren’t televised nationally like at the big schools so to get your name out there you have to work that much harder. Name recognition is another obstacle because of the competition level. Not many people have heard of the D 2 football schools because of the exposure level. It is because of this when you pop on a tape of a football player from a smaller school, the tape can be evaluated as lesser than someone from a bigger school. 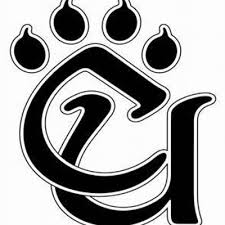 I think my biggest strength is that I do not get rattled often. Throughout tough times I can maintain a calm and cool demeanor.

My biggest weakness is I can be a procrastinator. I meet all deadlines for assignments I tend to do them last minute though.

I would say that I could be a great asset to your franchise for years to come. I am a hard worker who is willing to put in the time and effort to get the results needed. I am willing to do whatever it is the team needs of me in order to ensure success.

My favorite NFL player growing up was Michael Vick. He was electric and played at Virginia Tech which is 45 min from where I’m from. My favorite NFL team is the Atlanta Falcons. As a kid I went to Atlanta every summer and got to catch a couple of games. I began liking them while Michael Vick was still their Quarter Back.

If I could have dinner with three people it would be my mom, my grandma and my girlfriend. My mother and grandma both passed away before I got to college and met my girlfriend. I would be interested how they would like her.