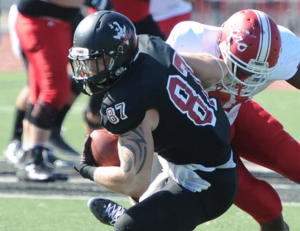 Paul Butler may be the best small school tight end in this draft class. He can do it all

Having opportunities to give back to the community doing things such as coaching kids on the field, volunteering for fish fry Fridays and community clean ups.

LeBron James, his work ethic on and off the court is what truly makes him great and its something I’ve always admired.

I was a wide receiver in high school and a defensive end at my previous school.

I don’t believe there’s many people who can run and catch the way I can at my size.

Defensive tendencies, where the safeties and linebackers are playing, how they might be showing potential blitzes and coverage’s.

I played against Jatavis Brown and Justin March-Lillard for an entire season when I was on the scout team at Akron, two current starters in the NFL. Competing against those guys every day really helped give me my competitive edge.

Rob Gronkowski, we are very similar in size and athletic ability, being able to make touch catches in traffic and absorbing big hits. 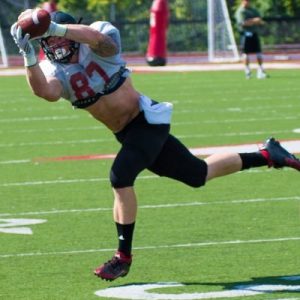 Listening to my head banging music and getting my mind locked in.

Adjusting to the level of play, the best athletes on the planet play in the NFL.

I’ve had to work for everything I have, I believe my work ethic sets me apart from everyone else.

I’ve only played at the true tight end position for 3 full seasons, there’s still a lot more I can learn about the position.

Not many guys have faced adversity the way I have on and off the field and my ability to always keep my head up and keep fighting and chasing my dreams makes me extremely valuable.

Rob Gronkowski because he’s the best tight end in the league but I grew up as a die-hard Miami Dolphins fan.

I’ve driven very small cars I could barely fit in since I was 17, I would buy a truck.