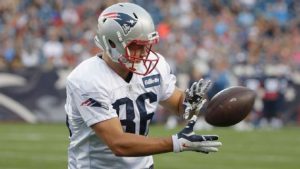 The Denver Broncos have just made a trade with the New England Patriots to acquire former Arkansas tight end A.J. Derby.

According to the report from Adam Schefter the Patriots received a 2017 NFL Draft pick in exchange for Derby.

Derby played college football at Iowa (2010–11), Coffeyville Community College (2012) and Arkansas (2013–14). He was drafted by the Patriots in the sixth round so I would expect the Patriots to at least get a fifth in exchange for him. Just a hunch though.