Packers have cut RB Knile Davis could he return to Chiefs?

The Green Bay Packers have already cut Knile Davis. That trade did not work out too well for the Packers.  The Packers were hoping they could get Davis in town and let him play but he failed to beat out Don Jackson for reps. 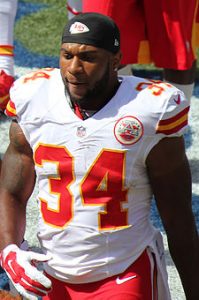 Davis rushed 5 times for 5 yards averaging 1 yard per carry in his attempt with the Packers. The Chiefs are banged up right now and they may be looking to put in a waiver claim for Davis, because they need the depth with the recent injuries to Jamaal Charles and Spencer Ware.

The #Packers have released RB Knile Davis, source said. That’s a bit of a surprise.

After trading for him, #Packers saw 5 carries for 5 yards from Knile Davis. They made the quick evaluation that it was enough. Released him