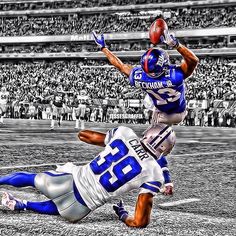 Odell Beckham has been getting criticized badly over the past couple days for his drama-like tendencies that have really seem to become the talk of the city.  Many of the Giants fans are criticizing him and now he has more people talking about him than his team right now.  His head coach does not want him to change but wants him to play salty.

“I think he has great passion for the game and a great desire to be one heck of a player,” McAdoo said, via the New York Post. “One thing I’d hate to see him lose is that drive and that passion. I like him as a salty, competitive player. That’s when he plays at his best. We just need to be productive when we’re doing it. You have to stay within the rules. I want him to play with a salty, physical, attacking mindset.”

Brandon Marshall the Jets wide out warned the Giants as well. He does not want the Giants to overreacted because it will cause problems.

“Those guys over there need to be really careful,” Jets receiver Brandon Marshall said regarding the Giants and receiver Odell Beckham Jr., via Daniel Popper of the New York Daily News. “They don’t need to be speaking out on their teammate. They need to keep that in-house, because they can lose him. They need to rally behind him and give him the support he needs and handle that stuff in-house, whether good or bad. Because whether they like it or not, he’s the best player on that team.”

“He’s the type of guy that he can play with anger; he can play with rage,” Marshall said. “Like, that’s not a distraction for him. He doesn’t need a sports psychologist for that, because he’s still going to make that magnificent one-hand catch. The problem is, it may be a distraction to his teammates. Guys don’t [want to] answer the same question every single week. But as far as him personally needing help? He doesn’t need help. He’s still going to produce and be the beast that he is. But when your teammates have to answer that question over and over again, that’s when it becomes a problem.