The coolest thing I’ve done is going back to my high school and teaching them the ways of college ball.. how classes work and helping coach my old high school.

The hardest class I ever had to take was college Physics

I’m am from San Bernardino California

My biggest role model is my mother.. cause with out her Strength , perseverance and will power to get through anything I would not be in the blessed position I am today to have the opportunity to compete on a college football field and overcome adversity

The other sports I played growing up where soccer, baseball, basketball, and ran track and field and did plenty of field events. 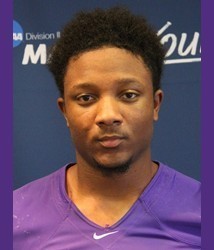 What separates me from others is my Versatility at my position I can line up at any defensive back spot and compete.. also the will to be a team player and accept my role each week on wherever my coach what’s to put me.

While breaking down film I’m looking for tendencies .. QB indicator .. what type of plays offenses run on first , second , third and fourth down. I look for key indicators with play formations that are given .. are they heavy run or pass in a certain formation and if so which type of run and or pass will happen..Also I break down favorite pass concept types and offenses “Go to” players and plays .. as far as breaking down a single player I like to watch how they run every pass play.. what they do if they get the ball or not.. how can he handle different press techniques , or off man.. is he physical and how fast is he compared to me.

There are a couple of players I’d say are the toughest player The first one  has to be my own teammate Bubba Jenkins .. he’s an all American fast strong an overall complete back that runs extremely hard… when he comes at you you never know if he’s going to run through you, hurdle you, or juke your socks off

The second toughest player I ever faced was Derwyn Lauderdale a former teammate of mine .. also a former all American .. he taught me a lot of things going against him and it took a lot of failed attempts at covering him one on one to finally pick up tips I needed to play man to man on a college level Wide out.

One player I’d have to compare my game to is the late Charles Woodson I know he just retired last year however.. our body types are similar and so are our games .. his versatility was unmatched his hunger and whit and he had a certain it factor to him that lead players to follow him and his work ethic..lead by example in everything he does and was respected by everyone.. calm demeanor and overall a good individual

Pre game usually I play a few songs from some artist back in California .. but once we break on the field prayer is a must

A small school player must overcome game speed talent level and criticism. Also a big thing that a small school guy must over come is to not get lost in the spot light. There’s not that much attention on us like major division one schools so moving forward to the NFL and making a name for yourself can be pretty big. But  I think coming from a small school is more humbling .. like myself a good amount of guys on my team work almost 20-25 hours a week .. everything we get we earn whether it’s new helmets, jerseys , and other accessories nothing is really given to us.. we have to go out and buy our own gloves leggings and wristbands and visors… so coming in contact with new found wealth would be greatly accepted but humbling because nothing was really given to us in the first place

My biggest strength is my versatility .. I can play anywhere on the field

My biggest weakness is my mentality I play a position that requires to have a quick memory .. however if I don’t make a play to over come my mistake I can end up trying to hard to put myself outa position and make plenty of mental mistakes

I would say a typical NFL sized 6’1 190 DB type of guy that can play anywhere on the field .. possesses the speed to cover on the outside and the lateral quickness to guard the slot position. Has the will to compete at any position and it does not matter were you put him on the field.. will learn the whole defense and all it’s positions of you asked him too