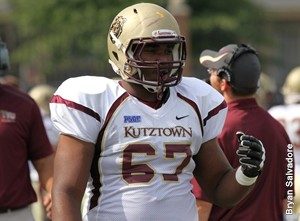 The coolest thing I’ve done outside football is Volunteering for the special olympics and Optimist club of Kutztown road race.  It’s a Community event that helps needed kids in the area.

I don’t necessarily have a role model, I just strive to be a better me.

When I was younger I used to be really into basketball.

At my position I believe my athleticism and overall ability to move separates me.

When breaking down film I am looking for fronts, alignments and tendencies and what the defenders do under certain situations or when we as an offense give them certain looks.

I’d say the toughest player I faced was in my sophomore year against Howsare from Clarion.

I would say Trent Williams for his freakish athleticism for his size and his mentality and ability to finish blocks.

I lay down and visualize myself in every scenario for each play we have scripted and I imagine myself dominating each play.

As a small school player I believe my biggest obstacle will be proving that I can yield the same results against a higher level of competition.

My biggest strength is my athleticism.

Overthinking sometimes because I want to be perfect in my technique instead of just playing fast. 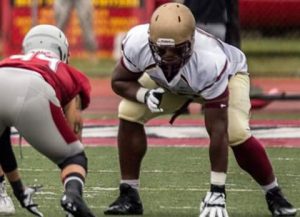 I would say you won’t find many guys like myself. I realize I’m gifted but I’m a worker and I pride myself in that more than anything else. I have a hunger and dog mentality I won’t let another man outdo me.

Tyron Smith, LT for the cowboys. His combination of athleticism and technique for how young he is insane.