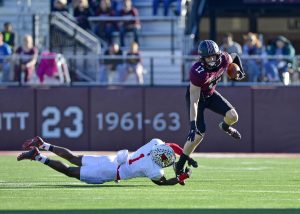 Southern Illinois wide out Billy Reed is a playmaker. He has soft hands and runs pretty routes

Every year we have a blackout cancer game.  People donate money to put a name on the back of a jersey.  Every name was affected by cancer, and I’ve grown close with the family who bought my jersey.  As a team we visited our local cancer center as well to see how important that game is to the community.

Financial portfolio theory, I was a finance major.

My dad because he taught everything growing up and developed my love for sports.

I’m a smart football player and I can use my body to get open.

Tendencies for DBs and how they play their press coverage.

Deiondre Hall from the Bears 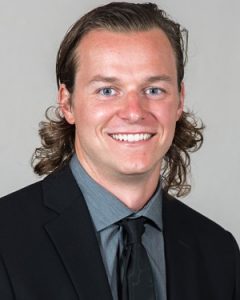 Adam Thielen on the Vikings.  I was watching Monday night football a few weeks ago and his routes looks similar to mine.  He’s the same size as me too.

Not really, just go over some goals before the game.

Just getting exposure and people thinking the talent level isn’t as great.  FCS football has had a lot of success in the NFL recently and I think it’s because the talent at this level is so high.

My route running and ability to make catches in traffic

Yards after the catch

I would say that I would help out the team in any way I can, and do everything I can to learn quickly. I’m a smart player and can make a difference on special teams.

I was alway a Mike Vick fan growing up.  Favorite team was definitely the Bears.

Something for my family