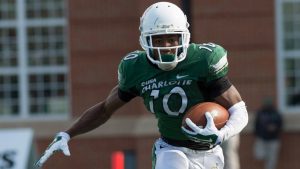 Austin Duke is a playmaker for the 49ers. He could be a great slot wide out in the NFL

Held Christmas party to raise/donate money & gifts to give to the women’s shelter. Annual Cops target kids event. I Started my own non profit organization called faith by works( in the process). Helped raise money for a homeless man I befriended to help him get a house & pay rent.

Some Business course it was so hard I wanted to forget it ever existed so I don’t remember the name.

My dad because he set the foundation for who I am & my pastor, Steven Furdick, as a Godly role model he has made marriage cool & being Godly even cooler. Spreading the word that we are on this earth for a far bigger reason than ourselves.

Less of the opponent & more of me. Focusing on the minor details of my routes, eyes & spacing. 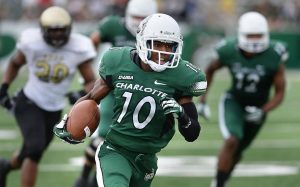 Charlotte has done a great job of exposure, character building, platforming & building relationships but some difficulties would have to be being schemed against as one of the more touted players(not a bad thing but noted) & no training table so weight gain. Even more unique is being a start up program and having to build. So taking tough lumps, not having the expectations of winning & still having to find ways to stay focused & motivated. Lastly, being very good & not getting the recognized credit for accomplishments.. .

Willing to do whatever it takes to be great.

Engagement ring, savings account or whatever the Vets make me buy them.