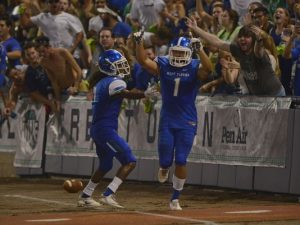 Anas Hasic of West Florida is a playmaker that is dominating at UWF.

been bringing our readers Prospect Interviews over the past 3 years and this year we mixed up the questions and added some fun questions for our readers. Our questions are designed to give our readers a little more insight on the player. We hope to bring you more than 350 interviews of NFL Draft Prospects this season. You will be able to track them all on the front page of our website in the banner to the right.  Now let’s meet the prospect!!!!

Help found an organization on campus called ”Argos for Humanity” where we help gather things for the homeless then go to the homeless shelter in Pensacola, and help out with feeding them and whatever else they need.

Brain behavior, experience, and anatomy. (this is all one course)

I was born in Ex-Yugoslavia, and moved to Phoenix Arizona as a refugee of war, as a child.

I ran track, and played basketball for my high school.

I believe my game has a ton of upside through my speed, route running, and hands but what I believe separates me is I am a stronger receiver I don’t get knocked off my route, or let a DB dictate where my route goes, I dont let Dbs successfully push me off my routes, or box me out for jump balls. I use all of my athleticism.

I look for the DBs tendencies on certain routes, I look for keys that the Db will give me to tip off what coverage they are running, I breakdown what coverage’s they run on certain downs and distances. I look for what other WR’s did successfully against a DB, I try to find any weakness a DB has for me to exploit.

Either Logan Ryan at Fischer sports last summer in Phoenix when he was working with Coach Sullivan, or Ryan Smith, my former teammate at NCCU he is now with the Bucs.

Although we are not similar in size, I feel I can compare myself to Steve Smith Sr. in terms of play style. We both are very passionate, hard-nose competitors, we are savvy route runners, can both stretch the field, and turn into running backs after the catch.

No, I’m not very superstitious. I just try to be focused and locked in.

I feel an obstacle for most small schoolers is the question of how good was the competition we played, and if we could compete at a higher level. We also don’t come from very prestigious places with a lot of eyes on us, so we have to find a way to generate some attention, and get our film in the hands of enough people.

I feel like my blend of size, strength, and speed is my biggest asset.

I’m a versatile. athlete. I can play any receiver position, Im strong physical and can run so I can contribute on all special teams, and I am willing to do whatever to help the team win. 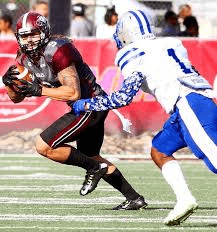 The Ravens because they were tough, physical, and played their hearts out.

I would pay off my student loans, and help my parents pay off their home.