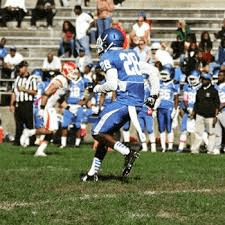 Marvin Easter of Cheyney is a playmaker. He can make all the players at the cornerback position

Doing community service any chance I get to give back and also giving advice to my peers to help them stay positive and humbled in what they want to do in life.

Statistics and accounting. Those classes were the struggle.

My hometown is Newark, NJ, but I live in Edison, NJ.

My dad is my role model because he kept me disciplined growing up and by watching him achieve all his goals in life, keeps me motivated and positive that I can do all things through Christ who strengthens me.

I did play baseball, but I wasn’t good and I also ran track back in high school.

I did player RB and WR in high school.

I’m a very coachable player who is humble and likes to learn from their mistakes. Also, I’m  always willing to work hard as well.

I look to see what plays are ran from certain formations. I also look for their bread and butter plays. Most importantly, I like to watch the WRs that I will be going up against and find out their strength and weakness.

Toughest player I faced was a RB. He was a shifty fast guy who made people really have to break down and wrap up to bring him down.

I would compare myself to Charles Woodson because he is a versatile DB who can cover and hit. I love watching his film because it shows and teaches you that if a play comes your way just be ready to make the play every chance you get. It’s not always about making a big hit all the time. It’s about being in the right place at the right time to get a pick or just securing the tackle.

I like to listen to music or watch NFL players highlight tape depending on my mood, but before the game starts I always say a prayer. It’s only right to give praise to the man above.

Coming from a small school you having to overcome being overlooked and you  can’t let that stop you from grinding. From how I was raised I was taught “if you don’t work, you don’t eat.”

My size as a versatile DB who can play corner or safety. I’m also a physical player who is very coachable and disciplined as well.

Staying patient in man coverage and trusting in my reads at times.

I would say I am a player you would want and love to have on your team. I am a work horse and refuse to give up. I’m a very coachable player and discipline as well. A humbled player who loves the game, loves playing the game, and is willing to do what It takes to get my opportunity.

My favorite team growing up was the Titans because that’s how I started getting into playing football, but now I like the Seahawks because of the DBs. They got some dogs in the secondary (LOB). My favorite players growing up were my cousins Thomas and Julius Jones, but that changed when I became a DB and starting watching Sean Taylor and Charles Woodson. Those two eventually became my favorite players. 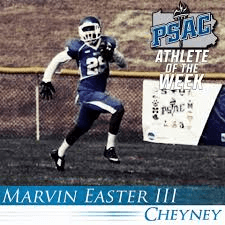 The first person I would have dinner with is my grandmother because she was my biggest fan. I was always around her and went everywhere with her when I came down south. Every chance I had I would give her a call even if it was everyday. I would love to have another dinner with her. It will be well needed. The second person I would choose is Charles Woodson because sitting down talking to one of the greatest DBs of all time, I would soak in all the advice and knowledge that he can give me at playing at the next level. Lastly, the third person I would choose is my brother because he is my best friend and by him being 3 years younger then me I look up to him just as much as he looks up to me. Every time we are together we would bug out and have a good time. I can always count on him even when we’re both busy we still have time to chit- chat. It’s a brotherly thing.

Funny you asked that because I tell my mom when I make I told her I will buy her the truck she want and she said don’t park it in the drive way, park it in the street so, I’m going to do what I was told. I would also, buy my own jersey and sign it and give it to my dad because he told me he would be a very proud father to have his son (Marvin Easter III) name on the back of a NFL jersey.