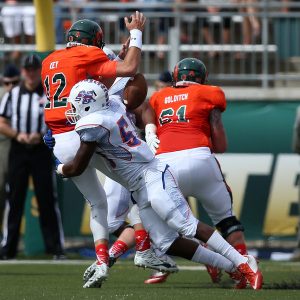 Marcus Lee of Savannah State has a knack for getting after the quarterback.

My name is Marcus Lee, Jr.

I play Outside Linebacker/ Nickleback

I attend and play for Savannah State University.

I enjoy working with young kids because they are the future. I have gone to Elementary and middle schools in Savannah and read books with the class and attended their field days. Also my dad is a youth football coach for the Collier Park Steelers in Atlanta, Georgia. I am an assistant coach for them and every time I am home I teach them important life skills. Not only how to become better football players but to treat their parents with respect, make good grades in school, and be leaders not followers. Seeing them win the city championship in 2015 brought great joy to me, because I seen how hard they worked.

The hardest class I took in college was Business Statistics. Even though the class was difficult, I learned about six sigma. That is how close to perfect your entity is performing. I apply that term to defense and football.

I am from Atlanta, Georgia

My role model is my dad. He taught me everything I know about this world, and it’s a blessing that he is in my life. I thank God for him everyday.

Growing up in Atlanta all of my friends and I played whatever sport was in season at the time. On top of football I played basketball, baseball, wrestling, track and field and rugby.

I have played just about every position on the field at some point in my career. From quarterback all the way to safety.

What separates me is my coverage ability. The NFL is turning into a passing league and I love getting out and covering slot receivers and TEs 1 on 1 or in zone coverage.

The main thing I look for is player tendencies, pre snap and post snap. Also Play calling tendacies out of certain personnels groups and packages

Tyrann Mathieu. His playmaking ability, the passion he plays with and heart is very similar to mine

I get a great massage the night before games and I also pray in the end zone before the game starts.

The biggest obstacle I had to overcome as a small school player is self-governance. We do not have all the same resources as a big school so I have to do things to make sure we are on the same playing field. I have to do things such as make sure I’m eating all the right food even if my school’s cafeteria don’t provide it. Find ways to buy protein. Also I have to put in extra work outside of practice and meeting times to make sure I have the advantage on game day.

My biggest strength is mental toughness. I might not be the biggest or fastest player on the field all the time, but my burning desire to compete and win sets me apart.

My biggest weakness is I’m too critical on myself. I beat my self up after games because I expect perfection from myself and the team. So if it doesn’t happen it takes awhile for me to recover. Recently I have been working on the 24 hour rule after games.

If you were to take a chance on me you would get the ultimate warrior in return. I promise to give the best me everyday to the team, the organization, and the shield. 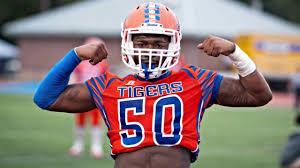 My favorite player growing up was Ray Lewis. I love watching the passion he played with every Sunday. My favorite team was the Atlanta Falcons when Michael Vick was their Quarterback.

My daughter, Mariah Lee. My younger sister, Dayzha Lee. And my Great grandmother Julia Ray Scott. All three of them have the purest souls and that would be an amazing dinner.

I’ll probably just give most of it to my parents. They have sacrificed everything for me to be where I’m at. I don’t think it’s enough money in the world to pay them back, but I just want to show them I truly appreciate them.