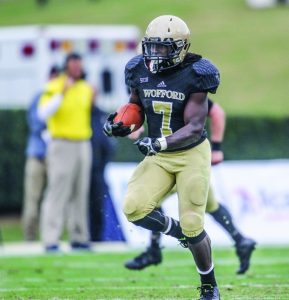 Wofford big back Lorenzo Long will punish you if you try to tackle him. He is known to blow up a cornerback or safety

I help this woman who lost her husband in July. I go over and do her yard work around her house and just spending time with her two boys who are in high school and daughter who is in middle school.

My mother, because as a kid I have seen her work so hard and never seen her complain about anything and always made sure I had what I needed.

My passion for the game and work ethic.

Look for the base scheme of the defense and the ways that the defensive line slants, how linebackers read and fill the gaps on stunts, and how the safeties rotate in coverage.

Devonta Freeman because he has good vision, quick and explosive and not the biggest of backs but has the ability to break tackles. 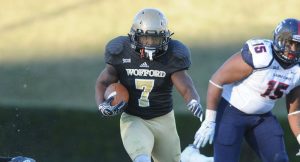 FaceTime my family and pray with them the morning before the game.

Not as much exposure as many bigger schools players, people often overlook the competition level of FCS Football

I am a player who is hard working and will come to work every day to be the best and make whoever is around me be the best as well.

Vacation for my parents