Lions sack master Kerry Hyder is not on the Pro Bowl List; He is not worried though 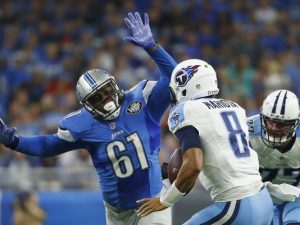 We are huge fans of Kerry Hyder the former Texas Tech pass rusher, and today he was slapped in the face by the NFL.

The sack master who has registered 5 sacks in 5 games was not on the Pro Bowl ballot. While Hyder is not worried about it, the Detroit Free Press and our site feel the NFL has dropped the ball.

“I’m sure people don’t know who I am, anyway,” Hyder said.

“I’m sure there’s some great players on the list,” Hyder said. “If I keep doing what I’m doing, I’ll be where I need to be. I’m not worried about lists and that kind of thing. If I get a bunch of sacks, they’ll look at me, so I’m not going in saying I’m a Pro Bowl end. I’m just trying to make plays and, at the end of the day, if that’s a Pro Bowl guy, hey.”

Via the Detroit Free Press:

Hyder’s omission is no surprise. Starters typically comprise the public ballot, and Hyder, who is eligible for the ballot that’s distributed to coaches and players in December, is a rags-to-riches story who was considered a longshot to make the 53-man roster at the start of training camp.