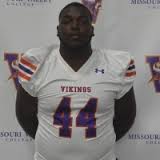 Kyrton Kilgore is a big boy that has a motor. The NAIA Nose Guard has a nose for the ball.

The coolest thing we do is go read to the local elementary school.

My dad is my role model because of the many sacrifices he has taken because of me and my brother and sister and he always remain positive about everything.

I played baseball, basketball, wrestled, and a little track.

I played linebacker and full back

My drive to get to the football you don’t really see 300lbs moving the way I can get around on the field.

When I break down film I look for any weakness or flaw I can, for example if the center is too heavy he lunges instead of kick slide so you push pull and stuff like that, overall just try to find there Achilles’ heel.

Brandon Wegher the most gifted running back I’ve seen or played against.

Gerald McCoy because not only is he a run threat but, he can also pass rush from the inside and still be productive.

My pre game ritual would be listen to R&B music and pray a lot .

Coming from a small school the overall thing you have to overcome is just exposure because you don’t get tv time like the big schools do, and you have to work extra hard just to get your name out there and circulating.

My biggest strength I believe is my athleticism, like I said for a big man I believe that I can run and tackle side line to side line just like a linebacker

My biggest weakness is just my overall strength I have to get my bench numbers up and work on getting my speed up.

I would say that I’m just looking for a shot to prove to you that coming from a smaller school doesn’t mean that you don’t have big school talent.

Ray Lewis will Always be my favorite player, just because he is a monster on the field and such a leader in a way that you have to respect him, I admire that characteristic of him.

With my first NFL check I would by my parents a home, they deserve the world and hopefully I can give them a portion of it.