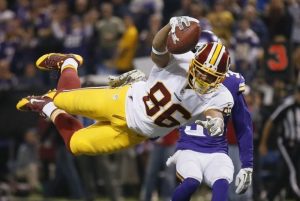 Redskins tight end Jordan Reed is under the concussion protocol

Washington Redskins tight end Jordan Reed might be one of the best young tight ends in the NFL, however he is really suffering from concussions. Over his career he has suffered 6 total concussions. 2 in college and 4 in the NFL, and this one has his family worried.

Reed stated that he hid the concussion symptoms from the Redskins and their staff.

Jordan Reed just said he got the concussion on 3rdQ catch over middle. He knew

during game but didn’t tell anyone.

Reed said his family and coaches are concerned but “I try not to think about it a lot. I pray a lot, have faith in the Lord.”