Fantasy Football Week 8 Must Starts at the WR position 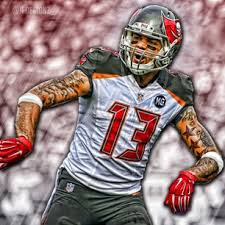 Mike Evans will get the ball, so make sure you play him this week

Fantasy Football has taken over around the NFL, and we wanted to make sure we had something for our readers as well. We have teamed up with a couple Fantasy Football Experts to help our fans get the best of both worlds.  Check out this amazing piece on Top RB’s to play week 8.

-Mike Evans is averaging almost 91 yards and a TD each game this season and this week he’ll be facing an Oakland defense that is allowing the 6th most fantasy points to WRs. I previously wrote about Jameis Winston having a big game this week and I think that Mike Evans will be a major contributor to his success. Mike Evans is a must start in week 8.

-If you have Julio Jones and he isn’t injured, you don’t need any advice to convince you to start him, but this week he is facing a Green Bay pass defense that has given up the most points to WRs this season. Jones is leading the league with 830 receiving yards and you should expect him to add at least 100 more to those stats this week.

Will Fuller vs. DET.

-Fuller caught just four targets for 22 yards in week 7 against Denver, but he has a favorable match-up against Detroit where he will likely see plenty of targets with DeAndre Hopkins drawing most of the defensive attention. Lamar Miller has been a nightmare for defenses, which should open up plenty of deep play-action opportunities for Fuller.

-The Oakland/Tampa Bay match-up should be a high-scoring game due to the struggling defenses. Amari Cooper has a chance to capitalize on the opportunity. Cooper came off of back-to-back 100 yard games before going into last week where he had just 29 yards on four catches. This week Cooper faces the Buccaneers defense that has been generous to opposing receivers (7th most fantasy points).

-Hilton still hasn’t received the attention he deserves in Fantasy football this season. He has received double digit targets in all but one game so far and he’s averaging almost 100 yards a game. Kansas City isn’t the worst pass defense this year, but expecting at least 5 catches from Hilton is reasonable. And to add to that, the guy is averaging over 15 yards a catch.