Is David Johnson the new definition of a dual threat running back? 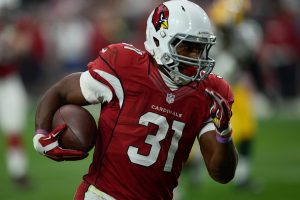 Cardinals RB David Johnson is a beast out the backfield

Former Northern Iowa running back David Johnson has been pretty impressive in the NFL and now I want to know what you think about him as a dual threat running back?

We all remember the Marshall Faulk’s, Thurman Thomas’ and LT’s but David Johnson could finish this year with a very rare record.

Only two players in NFL history have ever produced a single season with at least 1,400 rushing yards and 700 receiving yards.

So here is my question, are we looking at the next coming of Marshall Faulk?  His teammate sure thinks so….