Cowboys are hosting Robbie Gould and Kai Forbath for workouts 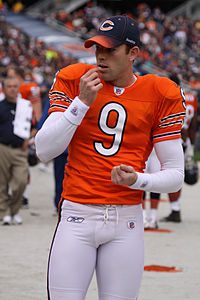 Cowboys are working out Robbie Gould

Mike Garafolo of NFL Media reports that the Cowboys are working out free agent kickers Robbie Gould and Kai Forbath with Dan Bailey dealing with a back.

Gould played with the Chicago Bears from 2005 to 2015, during which he became the franchise’s all-time leading scorer. Gould was originally signed by the New England Patriots as an undrafted free agent in 2005. He played college football at Penn State. He is the ninth most accurate kicker in NFL history.

Forbath played college football at UCLA and was recognized as an All-American and the best college kicker in the country in 2009. He was signed by the Dallas Cowboys as an undrafted free agent in 2011. Forbath is the second-most accurate kicker in Washington Redskins history, converting 87.0 percent of his field goal attempts (60-of-69). His 60 field goals, and 91 PATs all rank fifth in franchise history