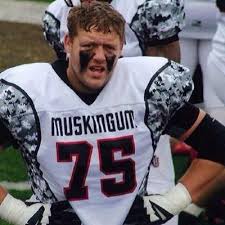 Chris Hoffman is a big boy. He reminds me of Anthony Castanzo of the Colts.

Working the special needs football camp at my high school for children who aren’t as blessed to have the opportunity to play this sport.

My parents for sure because they have always worked hard to earn everything they have and have instilled this idea that if you want something, you must work hard and give it everything you have to obtain it.

I played baseball, a little bit of basketball, and competed in Track and Field

I have played center and defensive line, but it has been a while for both.

My passion and drive to be the greatest. I am willing to do absolutely everything and anything possible in order to be the best.

I look for things in defensive lineman such as their stance and their tilt that would be an indicator to their tendencies when they play, as well as down and distance stunts and schemes.

Tom Lally from the University of Mount Union

Jason Peters of the Eagles because every play that he is in he is the most physical person on the field and has the mentality to play to the echo of the whistle.

The only one that I have is to listen to “In the air” by Phil Collins before heading out to warm up.

Trying to find enough time in the day to complete my studies, as well as go through film and break down the opponent for that week, and have a social life.

A tie between my competitiveness and my on the field IQ: The ability to read defenses and know their every move.

I sometimes overthink things on the field.

You can look everywhere in the world and I promise you will not find a harder working and more passionate player than myself.

My favorite player growing up was Jeff Saturday, and my favorite team was the Cincinnati Bengals.

Something nice for my parents for everything they have done to help me out through the years.