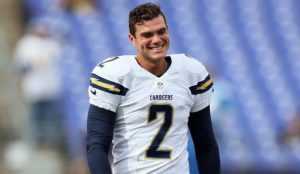 Josh Lambo is still new to the NFL, but this past week he learned a very valuable lesson. If you lose a game on a botched snap, and it is close do not laugh with your opponents after the game.

According to the San Diego Union Tribune, Lambo was caught on camera laughing with Raiders kicker Sebastian Janikowski after the game.

That didn’t sit well with some of his teammates, especially after a loss in which the Chargers trailed 34-24 in the fourth quarter but had a chance to tie it with just over two minutes left. They lost after a botched snap and hold, in which Lambo could have tied it up if given an opportunity.

While the loss is not on Lambo’s shoulders, his teammates were not happy.

“When a teammate sees you in a situation like this and you get caught, laughing it up, people take it differently,” McCoy said.

OUCH, they say Lambo apologized to his teammates and coaches, but this doesn’t look good.