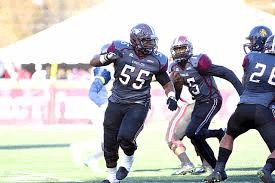 Carl Jones from NCCU is a monster on the O-Line. He is a very solid player

Going to a senior citizen “prom”. I actually was awarded a spot on the 2016 Allstate Good Works Team for community service.

My father, Carl E. Jones Sr. He taught me life lessons that I use to this day.

I played basketball and baseball

I played TE in high school

I play harder and longer than anyone else and it shows on film.

I look for tendencies in D-lineman. I look to see how linebackers take on blocks and I watch to see how players play in the 4th quarter.

Javon Hargrave who plays DT for the Pittsburgh Steelers nown.

Joe Berger of the Minnesota Vikings because of how hard he plays.

I read scriptures during pre-game meal.

Obviously the stereotype that we play lesser competition. And then my size, I’m not the ideal offensive lineman size, but film doesn’t lie. I can play with the best of them.

My knowledge of the game and ability to read defenses, as well as how hard I play every snap. 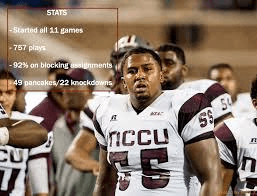 Film doesn’t lie. Don’t look at my school or measurements. Watch me film and more specifically watch our “money games” against ACC, MAC, and AAC schools.

Jason Witten and the Dallas Cowboys

Something for my mother.