Biggest injuries during week 8 of the NFL 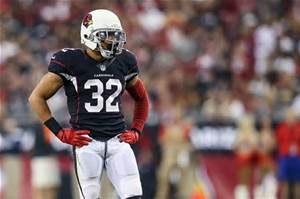 Cardinals Tyrann Mathieu was injured and will miss some time

The week is almost over and there were some major injuries this week of football in the NFL. Several good players were banged up badly and will miss some serious time.

Ware suffered a concussion Sunday and did not return to the game.

Smith took a big hit from Colts LB Edwin Jackson on the Chiefs’ opening drive of the game. When he came back he suffered another huge blow, that kept him out the game.

Mathieu banged up his shoulder and will miss 3-5 weeks according to multiple reports.

Veldheer will likely miss the remainder of the season as he requires surgery for torn tricep.

The Cowboys lost both Church and Claiborne on Sunday night with injuries. Church will miss 3-5 weeks and Claiborne will require surgery on a sports hernia and could miss the rest of the year.

Rodgers limped off the field late in the fourth quarter of the Buccaneers’ close game against the Raiders. He was seen today in a walking boot.

One of the league’s top rookies, Brown suffered a right knee injury in the fourth quarter.

Both left the game with injuries. Hunter Henry had wrap on leg, Tyrell Williams could barely walk

Davis left the Chiefs game with a concussion and did not return.

The sack leader of the NFL suffered a hamstring injury but is optimistic he can return Monday Night against the Seahawks.