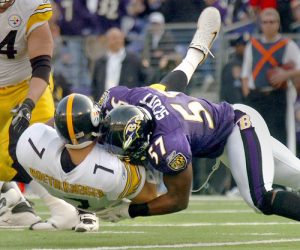 Former NFL linebacker and current CBS analyst Bart Scott insinuated on Sunday that Roethlisberger fakes his injuries and called him a “Drama King”.  Well Big Ben was not to happy about the comments.

Roethlisberger finished the game against the Dolphins after suffering a knee injury. It was later revealed that he suffered a torn meniscus in his left knee, but Scott felt at the time that Roethlisberger was faking. Well Big Ben fired back today.

“What did I do to deserve that? All I’ve ever done is keep playing and keep my mouth shut,” he said, via Ron Cook of the Pittsburgh Post-Gazette. “You just have to shrug that stuff off. But I would tell him to go see John [Norwig] our trainer and check out my medical file. It’s pretty thick. You can’t make that stuff up.”