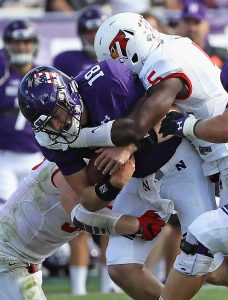 B.J. Bello of Illinois State is an animal. He is all over the field causing problems for the opposing teams offense.

Visited different elementary and high schools to read to them and talk about what it takes to be successful in life and reach their goals.

Statistics in Applied Science and Technology

My father because there has never been a time where hasn’t done for everything he could to provide for our family.

My versatility and athleticism. Being able to play true in the box linebacker, playing outside of the box in space over receivers, playing man to man coverage on tight ends and slot receivers, as well as being a dynamic pass rusher. Also being effective on all special teams.

When breaking down film, I look for the offenses favorite plays and formations. Tendencies are huge to me because I like to play off of good instincts. What the offense does well, what they don’t do so well. Weaknesses in players that I can take advantage of, as well as how I can use my strengths and knowledge to put me in positions to make plays.

Telvin Smith because of his speed, athleticism, as well as good football instincts.

Not being recruited highly from missing majority of my junior year season in high school. Faith in God allowed me to overcome.

Talking and praying on the phone with my mom and dad.

Instincts, athleticism, ability to play many different positions on the defense and all special teams. 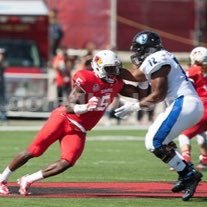 Being new to being a pass rusher, I need more work on my footwork and technique playing on the line and pass rushing

With my size and athleticism, I have the ability to be successful at many different positions on the defense. With the tools that I carry I am capable of playing all linebacker positions, being an effective pass rusher, as well as playing man/man coverage on tight ends and running backs without a mismatch.