Alshon Jeffery calls out Martellus Bennett; Why didn’t you say that when you were here? 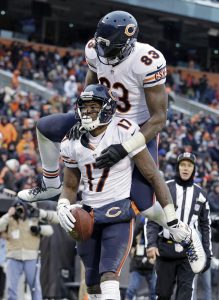 Chicago Bears wide receiver Alshon Jeffery was not very happy with the comments Martellus Bennett said about his former teammates and coaches. Bennett said this last night in his E:60 with his brother that the Bears players and coaches were a bunch of Bitches.

“We just had a bunch of bitches on the roster — that’s why we didn’t win games — and coaches liked the bitches,” Bennett said.

Alshon Jeffery spoke about the comments saying “Why didn’t he say that while he was here?”

I actually agree with Jeffery, this was a bitch move.