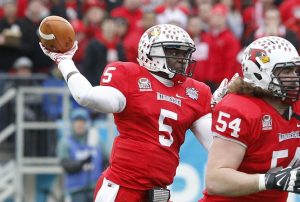 Roberson was signed as an undrafted free agent to the Vikings after going undrafted in the 2016 NFL Draft. Prior to entering the NFL, Roberson was a collegiate quarterback at Indiana University and Illinois State University. Roberson had a 3–4 win/loss ratio for his career as the starting quarterback at Indiana and a 23–5 ratio for Illinois State.