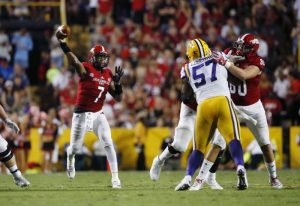 Davon Godchaux has been reinstated by LSU

LSU’s Junior defensive lineman Davon Godchaux was arrested on misdemeanor charges of domestic violence battery/child endangerment and false imprisonment on Monday, according to the East Baton Rouge Police Department. Today he was reinstated.

The 6’4, 290 pound defensive lineman made 20 tackles with two sacks and two fumble recoveries in the Tigers’ first four games of the season.

The charges against LSU defensive lineman Davon Godchaux in connection with a domestic abuse case involving him and his girlfriend have been dropped. Hillar Moore, the district attorney for East Baton Rouge Parish, announced the decision Tuesday afternoon.